Had a lovely message this afternoon from Lisa who last year had Maisie, blue point female, one of Joy's kittens, Her sister Emma had Harley, blue mitted male with white tail tip, one of Missy's litter . As both litters were borm at the same time the kittens were all brought up together as one big litter with two Mum's! 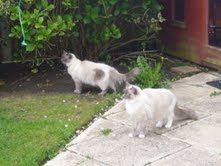 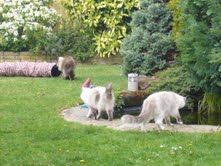 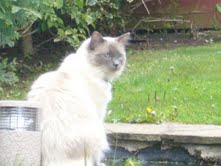 Just got back from vets with Maisie and Harley for there annual jabs. They were as good as gold bless them. Maisie is at my mum's now for a few hours to play with Harley then when she comes back later on, no doubt Harley will be here for a while....
Maisie has settled in very well in our new house and being that it is only 5 minutes drive from Harley means they see each other no less then 4 times a week which is lovely. They are still very close and adore being with each other but thankfully Charlie and Maisie have built up a good relationship as well because he went off her when we lost Tess and Milo in November. As you can see Maisie has a lovely big garden now to play in every day, she loves the pond with the fish - TOO MUCH!!! Maisie is really starting to look like her mum which I am so happy about as I fell in love with Joy the moment I saw her. Maisie is starting to get really fluffy. She was as a kitten but then lost it to a silky coat. She is now turning into a fluff ball ever so cute. I am sure but sure I would have all of Joy's litter as she is lovely.
Forgot to say actually about how big Harley is! He is growing forever, the longest legs that dont stop. Once he starts to fill out in next couple of years he will be amazing as he is so dopey and big! Maisie is a proper little madam so cute but into EVERYTHING. She really thinks she is the boss, to the point if we say 'Maisie, No!' we get a mouthful back of her, funnniest thing ever. She is so so clever, love her to bits!!!
Posted by Tx at 09:35 No comments: 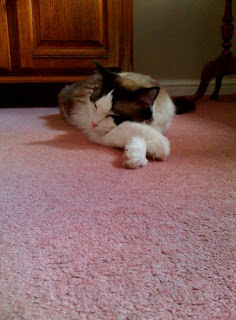 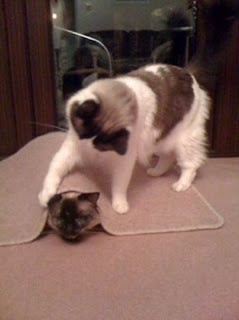 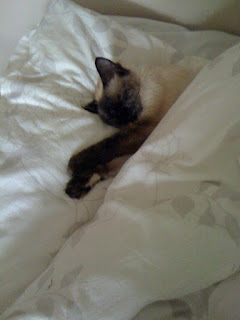 Remember sometime back we had to rehome 2 of Peaces kittens, Buddy and Tiny well I've had an update and some lovely photo's from Julie , including some of them discovering the garden . However I thought I would share these with you of Buddy in a beautiful crossed paw pose, them Playing in a mat Although I think that perhaps should be entitled "Isn't it your turn on the bottom now!" or " Found You!" and Tiny really making her self at home for a quick nap, it's so great to see them happy in their new home.
Posted by Tx at 03:32 No comments: