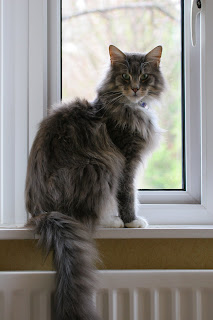 Watch out ! watch out! There's a fox about!

I have recently had one of my owner friends, Lisa, tell me an awful story that happened to Maisie one of my kittens , now 2 years old. They were all out in the garden of there town home one evening in September at about 6 o'clock, when Maisie who had been near a boarder let out a horrific scream, They rushed over to find a fox had her!! Luckily they managed to get her away from it, although her leg was damaged. This fox had been being feed by people and had got quite brave! When she asked around she discovered several cats in the vicinity had gone missing never to be seen again. Very Concerning and another good reason to keep your cats inside!! Maisie has recovered but it took some time as although it wasn't broken it was very bruised and battered. So she was limping for sometime but she had a very lucky escape.
Posted by Tx at 10:50 No comments:

HELP! I need a permanent loving home for two full grown neutered Ragdolls, they must go together as they have never been apart. They are my Precious’s only set of kittens and have been living a life of luxury , unfortunately Charlie who owns them is relocating with her husband to Oman for 2-4 years and after much heart wrenching has decided it would be unfair on the pair to take them with them, as although they have pet passports, they do not recognize them over there so they would have to go into Quarantine for 6 months, which is not fair on the pair who are going to be 6 in September They are very big handsome lads and have been much pampered. They are very loving and lovable, up to date with all vaccinations and neutered,They come with all toys, litter trays etc. The only cost involved will be the fuel for me to collect from Cornwall , which according to the RAC calculater is approx £300!
Posted by Tx at 08:33 1 comment: 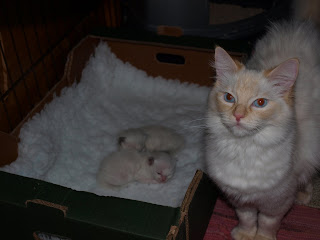 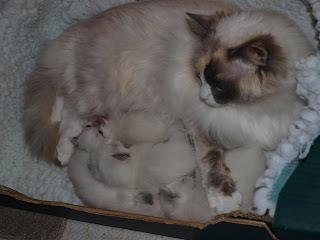 Missy has had 5 kittens, on Saturday the 5th March, 2 girls and 3 boys blue points and mitted although yet to know whether any of the girls are tortie's yet. She is an old hand and all went well. However , it was not the same for poor Sopretty! She had to have an emergency C-section on Monday the 7th March. as she only had a single kitten for her first pregnancy , it was now well over due and the placenta was breaking up! So we had no choice, the little kitten was very weak and it was touch and go for a few days, but luck was on our side and after 4 days of supplementary feeding every few hours on my side and lots on motherly loving we turned the corner and the tortie kitten started to put on weight. Now everybody is about the same weight, strong and appears to be doing well. Sopretty is fostering the smallest of Missy's kittens a blue point boy which works well for everyone.
Posted by Tx at 06:44 No comments: