Day 3 and all is well 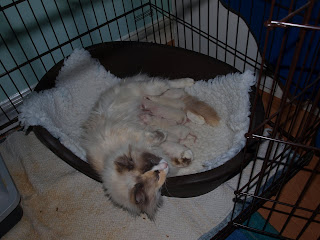 Well so far so good! I weighed them all and they have all put on a bit of weight they range from 93g to 111gm. So fingers crossed we are on the right track.
Posted by Tx at 12:43 No comments: 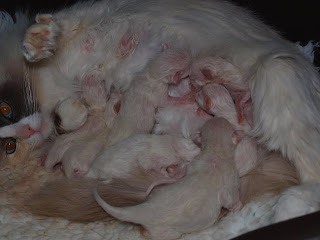 Well it's day 2, and they all appear to be feeding and she is so proud of herself! She rolled over when I got the camera out so I could get all 7 in the picture! 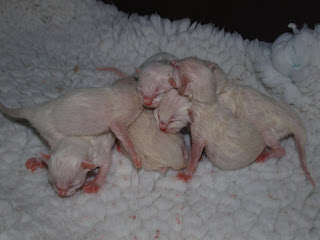 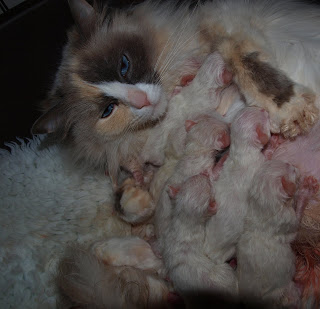 Well what a day it's been! about 5 this morning Missy woke me yet again all restless having had a show yesterday afternoon. She later produced the first 2 kittens almost simultaneously with out a placenta in between, clean them up and number 3 arrived a little break, much pushing and a tail appeared , then disappeared repeated this a few times then a single foot ( not a good sign) But after a lot of effort and a squeal out popped number 4, Number 5 then arrived the right way around but a little distressed at the wait. We were all exhausted and she settled down to clean and feed them . so I moved her to the cage stripped my bed , where is insisted on having them in between my legs ( not pleasant, but she the most important one to be happy!). Put them all in the wash , Returned to find her pushing again , and to my surprise out came number 6! after settling them all I decided to go an have a cuppa with a friend and show them the photos. Just went in to take some more and check on everybody, couldn't believe my eyes had to count several times to confirm it there are 7 clean little ones feeding away!!!!!!!!!!! So fingers crossed now they can make it through hurdle number 2 the first week.
Posted by Tx at 07:48 No comments:

AN EMAIL FROM TINY

Just thought i'ld sent you a picture of myself Tiny x. ( by the way mummies thinking about changing our names, might be Katie, Lulu, Penny or Poppet!! As for my brother, he could be Bob, Sam, Tom or Twiz ( what do you think??) xx 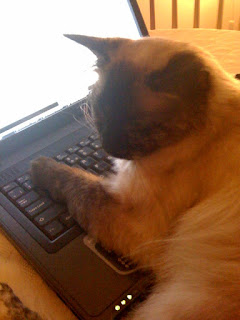 Hi Tiny,
We all know that we humans give you names and you have your own cat names that are secert from us. But if Mummy wants to change your names that's fine by me and we all know that if you don't like it you'll ignore it !!! I once had a kitten that had a large patch on it's nose so it got called sploj , he obviously never liked it and totally ignored you when called by it as soon as we changed it to cfor ( as in c for cat) he used to come running when called! So good luck with the new names let us know which one you like best , Poppet and Twiz are the ones I probably would have chosen for you myself! But then what do I know!!! Tx
Posted by Tx at 01:29 No comments:

News from Tony on Max and Merlin 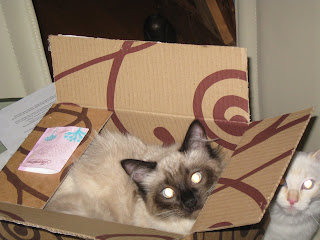 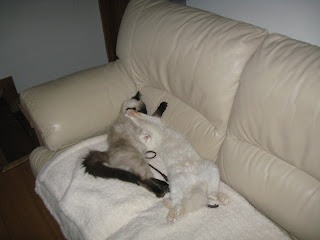 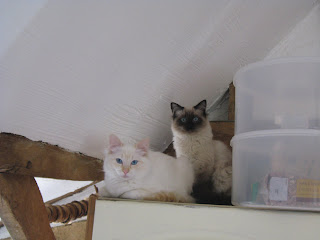 Just thought I'd drop you a quick note to say that Max and Merlin have quickly recovered from their Neutering Ops and are back to normal, although not quite as manic! I thought you'd also like a couple of pictures to show how they are getting on. They are still growing and I think Max especially is going to be a very big boy. There is now nowhere in this place that is safe from them - the one on the cupboard is a good case in point. They have to scramble up the chimney breast then cross the room on one of the beams about 8 feet up to get there. I've got my heart in my mouth every time I see them do it, especially when they start fighting at that height. Cheers, Tony.............
Posted by Tx at 08:54 No comments: 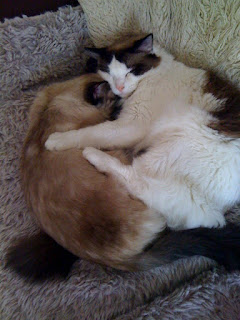 Had to send you this, how cute!! They are really happy here, and we love them very much. SO naughty!!! God into every thing Julie x
Posted by Tx at 08:52 No comments:

Happy first Birthday to George, Bella , Elphie, Neko , Zena, Bungle, Maisie and Harley
Hope you all have a fun time celebrating in your new families.
Posted by Tx at 00:56 No comments:

They have settled in so well 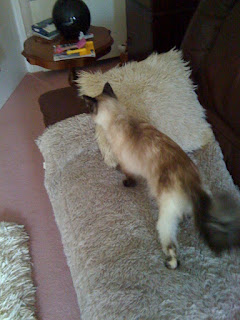 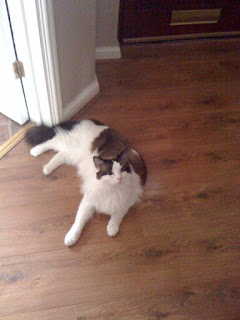 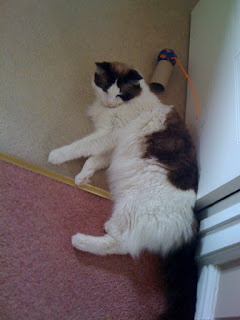 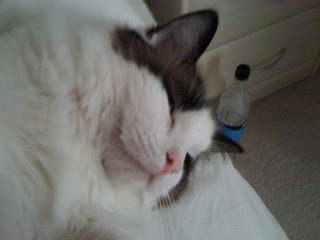 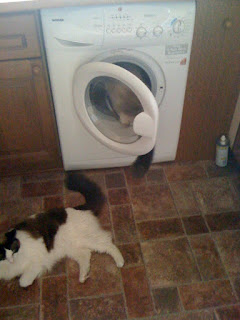 Spoke to Julie yesterday, Buddy and Tiny have settled in well. Buddy is so clever he has worked out already how to turn taps on for a drink! He can also open and close the wardrobe doors can be slightly scary in the middle of the night!!! He can also open the Washing machine then encourages his sister to get in!!!
Posted by Tx at 03:25 No comments:

Update on Buddy and Tiny

I collected this lovely pair from their home on Saturday, there was a very tearful farwell well from poor Maggie who decided that it was best for them to be rehomed. However, the good News is that by Sunday evening they we safely in their new home with a couple who are going to love them to bits. Although Buddy and Tiny were nervous having lived in the flat with Maggie for over 18 months, as soon as they meet the couple that might rehome them it was love at first sight , Buddy instantly took to the gent who made a big fuss of him. Tiny was a little more reserved but once enouraged to come out from under the cupboard was happy to lap up the attention she was given. As soon as the promised photo's arrive I'll let you see them.
Posted by Tx at 00:20 No comments:

Kittens Due End Of March !!!

Although the cold weather seems to have had an effect on the girls calling. Missy it defiantly pregnant by Tyler and the kittens are due around the last week in March. I already have a few people on the waiting list so if you are interested in Blue points, Reds or Torties and would like to have your name on the waiting list to be among the first to visit them please contact me.
Posted by Tx at 00:04 No comments: 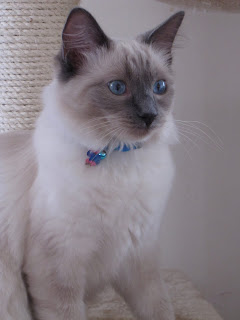 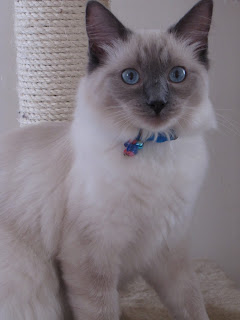 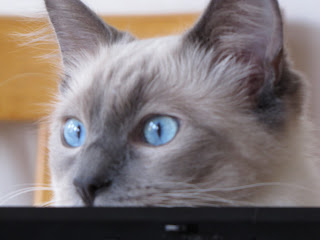 Just had an update on Sapphire who now lives with James, Kerry and Family :-

"the Queen" ; she is a very fussy eater, always giving a gentle meow when the fridge is opened - roast chicken being her favourite. She will then turn her nose up at her cat food in protest if there isn't any chicken set aside for her. Always playful, she has her favourite toys and will fetch everytime with her own spongy plaster. If she wants to play, Sapphire will drop her plaster next to you and let out a very delicate meow to get your attention. She is very healthy and her shiny coat is now getting a nice depth of colour as she ages.The pics are of this morning, the last one I couldn't resist - her peering over the computer as I was typing, which was better than her old habit of laying on my warm laptop keyboard. Thanks for doing a great job and your son for playing with her. It has really helped her settle and become a member of the family. All the best. James & Kerry Drummond
Posted by Tx at 07:25 No comments: