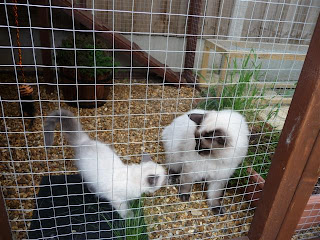 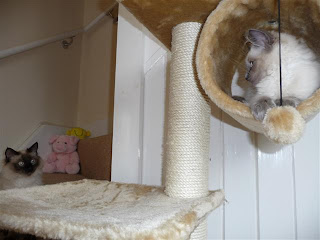 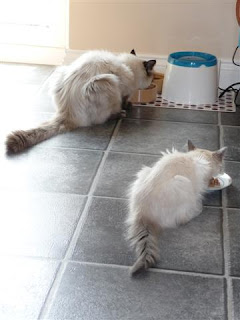 On Thursday, something quite funny happened! Darcy had gone into the garden and Sookie was sleeping, so I went out with him. Sookie woke up and was most put out to be left inside, so started miaowing and scratching very loudly at the door, but still half asleep with her eyes closed. I opened the door a little bit and Darcy went straight up to her whilst she still had her eyes closed (in the middle of an indignant miaow) and 'kissed' her nose! That seemed to be the ice breaker, and now each morning they have a mad half hour where they chase each other across the house like a Benny Hill sketch! Sookie also followed Darcy out into the cat run, so that is their new 'hang out' area. I figure that if they are happy enough to be in the cat run tunnel together they must be getting fairly comfortable with each other.

Darcy has still been a bit jumpy and everytime he got close enought to touch her, he'd then get scared and run off, but today he appears to be have got a bit braver... he's obsessed with Sookie's tail and has been trying to catch it for the last half hour and Sookie has just rolled over and let him (until the point where he decides to munch it!).

The other thing that we've found amusing is that Sookie has rejected her Pro Plan and instead periodically grazes at Darcy's dry food bowl in full view of him, then climbs into his litter tray... Darcy seems to have accepted this however, and returns the favour by finishing off her wet food as soon as he's finished his.
Posted by Tx at 09:26