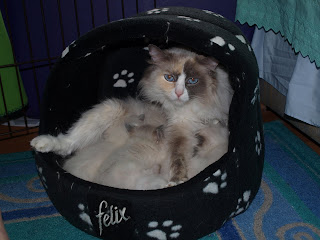 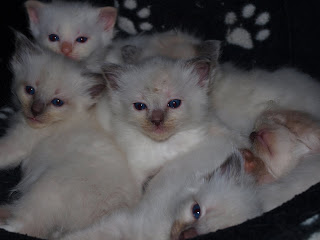 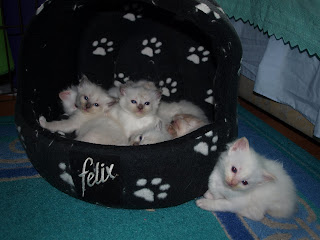 Well this was a funny sight went into see them and Missy was feeding all 7 in this small cat bed! A very tight squeeze! The blue kittens in the centre looks a bit odd because Missy decided he needed a bit of a lick just as I was trying to take the photo so his face is still damp and all over the place! As you can see they are all growing well and in fact little Titch now weighs the most! That's him on the outside of the bed.Tried to give them a dish of milk a couple of days ago only Titch almost got the hang of it sort of ! He did much sneezing as he tried to suckle it up! Then realised he could lap it however it appeared the only way he could do this was by lying in the plate and lapping around himself. VERY MESSY so I'll leave it a little while before I try that again! Sorry didn't have the camera to hand at the time to record it for you all!
Posted by Tx at 06:02