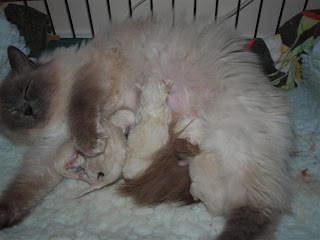 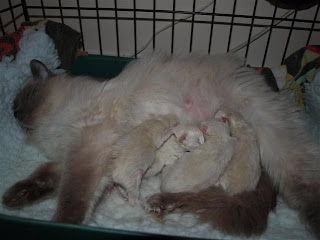 Very Busy Week! In which Joy finally had her kittens Wednesday night! Very difficult birth poor thing. She was odd all day yesterday, at lunch time she actually took my hand in her mouth and lead me to the bottom of the stairs, we went to sit on the bed but as nothing appeared to be happening I went back to work. Whilst I was in the bath last night she stood up and grabbed my arm with her paw and when I put my hand out she again grabbed it in her mouth and tried pulling me out of the bath. Finally about to she woke me by sitting on me in bed and letting birthing fluid soak me. The Problem turned out to be that just a tail was protruding and disappearing again. As it was middle of the night I tried what the vet told me last time and popped my two fingers in and managed to manipulate it enough after several more painful pushes we managed to deliver a live kitten between us! But that really started her off on the wrong foot as it obviously really hurt her. 2 was not to bad but 3 didn't arrive until 4 ish and was the same way around and gave me a real scare as it was Blue when we got that one out but and cough and a sneeze after some firm rubbing and it was in the land of the living. But this time I needed the loo! but she wasn't going to be left and actually left the kittens to come with me which concerned me. Number 4 arrived about 5, so we both collapsed exhausted and she slept with her head on my pillow whilst the babies snuzzzled in . Again when I got up at 7 she insisted on visiting bathroom with me but ran between us every time the kittens squeaked so I have put her in a cage with them whilst I sort the rest out and do the bedlinen washing! Fingers crossed we get no pneumonia in the babies after their traumatic start. We are now on day 3 and they are all looking fat and round and appear to be feeding well.
Posted by Tx at 02:08