Max and Merlin discover out doors! 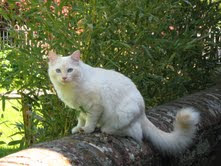 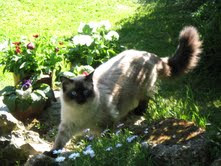 I had a lovely email from Tony and Kareen last night which I thought you would like to see the latest from their kittens who were from KT's litter last September so they are now 7 months old!

Having escaped out of both front and back doors several times our two now seem to think that they are outdoor cats and demand to go out now, with Merlin being especially vocal. They've been out in the garden but it never seems to be enough, although the promise of chicken soon brings them back inside. Merlin has also met next doors 16 year old tabby, who though she can barely walk, saw him off in an instant. Merlin has also had his first little mishap this weekend when he poked himself in the eye with something that scratched his cornea. Fortunately the antibiotic cream has cleared it up quickly and there were no secondary effects, but it had us worried for a while. True to breed type he just laid there while I opened his eye and put the cream in it. The final check with the dye this evening was funny as it ran from his eye out of his nose so when the vet turned on the UV light he had a luminous nose! Both of them are still growing of course (Merlin is now 4.5kg and Max 4.9kg) and they still seem to be getting heavier every day - especially when they jump on you first thing in the morning. I also thought I'd let you have a couple of photos to see how they are looking now. The light isn't that great in the house so having them outside in the sunshine yesterday was too good an opportunity to miss to get the camera out.
Posted by Tx at 03:24