Just a bit of back ground on Molly's new home she went to join a red point Ragdoll , Goose, who was very depressed after having lost his litter mate , Mavirick to HCM. It had been very distressing to everybody in the family as he had his fatal attack while he was alone at home with Goose, When Laurey arrived home poor Maverick was in such pain the only thing the vets could do was put him to sleep. Goose then as his brother had to under go numerous test to check he wasn't in danger of suffering the same fate. So when they came to us it was very important that Molly was HCM negative to guard against any further distress for all concerned. They were very nervous when taking Molly home as how Goose would take to her as the new girl. 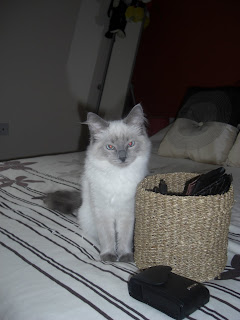 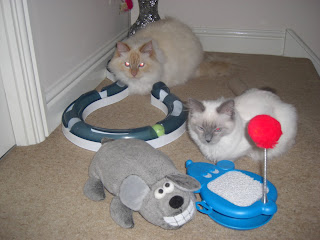 However this is the email I received yesterday with the photo's:-

As I said in the text Molly is wonderful. She loves being with Goose and also following us around wherever we go. She loves playing fetch - she has a little duck teddy which she brings to you when she wants to play. She has a big appetite and her and Goose wake me up every morning without fail asking for brekkie! She loves talking to us and I literally cannot do anything without her playing - when I sweep the floors in the morning she hangs off the brush, she hangs off my hand when I use the floor wipes, she grabs the washing when I am getting in ready to go in the washing machine, she just does not stop, ha, ha. 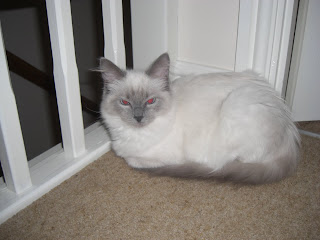