Poor Flossy had to have an emergency c-section on Tueday. Produced a single male kitten, who despite being poorly has made it through it's first night , with feeds from me, and has actually tried feeding from Flossy. Very early to say anything but fingers and toes crossed! However, today the news isn't so good! Flossy is ok but her little one isn't doing so well, it rallied yesterday and was feeding from her well, but hasn't fed much during the night and didn't want made up milk really at last two night feeds, so I am not too hope full 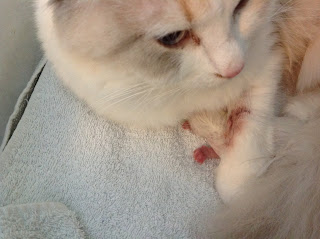 Tiggy went into labour at 1pm this morning,  then the fun started as she really wanted to be in the same box as Flossy, so a box had to be placed close enough so they could touch, there were 3 at 3pm! I think we have more to come but Tiggy had produced 3 big squeaky babies quite naturally! Thank goodness. By four forty another 2 had arrived. After many attemps to keep them apart I had to give in, so as the girls were desperate to be in together I have put them all in one cage ( with door open, of course) I put in the big dog bed and they are all in together, so at least little flossy's one will be warm and comfortable and might even perk up and feed. 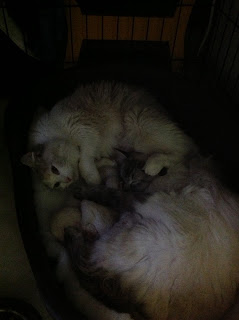 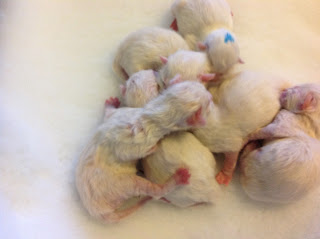 Flossy's kitten has the Blue heart on it's head as you can see it is about the same size as the new born kittens  as it wasn't due until at least tomorrow!